Neya Systems continues to support the growing UCS Community through its latest release of the UxSDK for UCS. This version supports UCS Version 3.4, which is provided by SAE AS4-UCS. UxSDK allows software developers to generate DDS IDD and full C++ and Java software interfaces compliant to the UCS 3.4 model. In addition, it includes model import and export tools to allow developers and system engineers to rapidly extend the UCS model to support additional services or entire new domains. UxSDK is being used by multiple government and commercial organizations to integrate legacy software into the UCS architecture and develop new capabilities.

It directly parses the UCS Architecture Model file to auto-generate the server and client interface code for the services required in a UCS system. 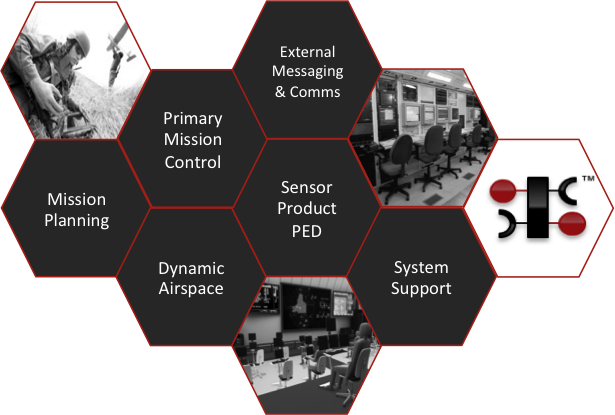 It is fully compatible with all Department of Defense and contractor extensions to the model file, including extensions to support unmanned surface, subsurface, and ground systems.

The generated interface code can be targeted toward multiple DDS middleware products for either C or Java and is configurable to different system non-functional requirements.

Lowering the Barrier
UxSDK™ for UCS lowers the barrier to accessing the UCS Ecosystem and UCS Repository by significantly reducing the startup time and cost in acquiring the necessary expertise in the UCS Architecture and UCS system middleware APIs.

The SDK handles the integration of UCS service interfaces with the program-of-record defined middleware API.

Focus on Value
UxSDK™ for UCS robustly partitions the development of the application software business logic from the upstream UCS service specification and the downstream deployment. This allows the application developer to concentrate on the value provided by the service.
Deployment decisions are deferred and can be globally applied – or reapplied – by the system integrator for each UCS system environment that hosts the application.

UCS Conformance
Neya Systems is the industry expert in the UCS Architecture. It provides the engineering management of the UCS Working Group; we have authored many of the UCS documents, including the Conformance Specification and Architecture Description.

Extending UCS
The SDK is based strictly on the information structure of the UCS Architecture Model and not it’s content; it will work with any extended version of Model that satisfies the UCS Conformance Specification.

Extensions include JAUS services, STANAG 4586, and program-specific additions to the UCS Architecture.

Neya Systems is a recognized expert in extending the Model and can support Government and industry additions as needed. Valid extensions include new or expanded service packages, new unmanned system domains in the Conceptual Data Model, and new or expanded Logical Data Models and message sets.

Portability
With UxSDK™ for UCS, the service interface code can be targeted and re-targeted toward different middleware technologies and system non-functional properties.

The code generator is templates-based, allowing globally defined coding styles to be applied to a single service or group of services within a UCS system deployment architecture.

The SDK supports the popular DDS middleware choices used by UCS systems for both C++ and Java languages. Support for additional middleware technologies is planned, based on Government UCS programs and priorities.

Test & Evaluation
UxSDK™ for UCS can be used as a stand-alone or integrated UCS Conformance Test and Evaluation (T&E) Tool.
The SDK generates the interface code for both the server and client-side of the UCS service interface, which can then be used with test scripts and service stubs to evaluate software conformance to the UCS Architecture Model. Conformance can be evaluated at the software component level, software configuration/service collaboration level, or at the system level.

When used as a thirty-party T&E tool, it will find both service-specific and system-wide errors in the software development methodology used to generate UCS service implementations.

“Plug-and-Play” Autonomy – Does it Exist?

Six Lessons from Being a Bootstrapper